The findings of my research so far (and let me tell you, I still believe myself to be only ankle-deep in research) has been richly rewarding. The sociocultural connections that I have discovered to date provide enough material to fuel several stories. And let’s not be fooled, my direction has been fully plotted for a rich story of darker magical realism. “The History of Tattooing” (Dover Publications, 2009) is rife with incredible real world examples of tattoo history that could easily find itself in the pages of a Stephen King, Clive Barker, or Joseph McGee novel. Yes, I did just put myself in the same company, lol…my blog, my rules.

For instance, there were several early beliefs ( as written in Sinclair’s “American Anthropologist”, vol. X and XI) that the soul was regarded as a tangible object. Upon physical death, the soul, or spirit, assumed an “exact replica of the earthly body”, to include any tattoos or marks. These tattoos served as rites of passage through the afterlife. Take the Sioux Indians for example. They believed that tattoos received in life would allow for their passage to the “Many Lodges” in the afterlife. It was Sioux belief that the spirit, mounted on his spirit horse, would be stopped in his ghostly passage by an old woman. It was her duty to inspect the dead warrior for his marks, or tattoos (often on his forehead or wrists, and sometimes on his chin). If he was discovered without, he was thrown from the cliff, or cloud, to wander aimlessly and melancholy through the mortal world.

Page Notes from "The History of Tattooing"

The Northern Tangkhuls (India) believed that tattoos linked husband and wife in the afterlife. The Abor tribes (Himalayan) considered the tattoo the “poor man’s identification mark in heaven.”  Those of wealth were adorned with possessions befitting their station. Those without were inked up.

As I prepare to move into the interview phase of my research, I have lined up the following potential resources:

I will be conducting two face to face interviews for the story, both with practicing tattoo artists. Erin Kane is an artist at Infamous Arts Gallery in Plymouth, PA.

Brian DiCola is an artist at Loyalty Ink, in Kenvil, NJ and at Eddies Tattoo, in Philadelphia, PA. 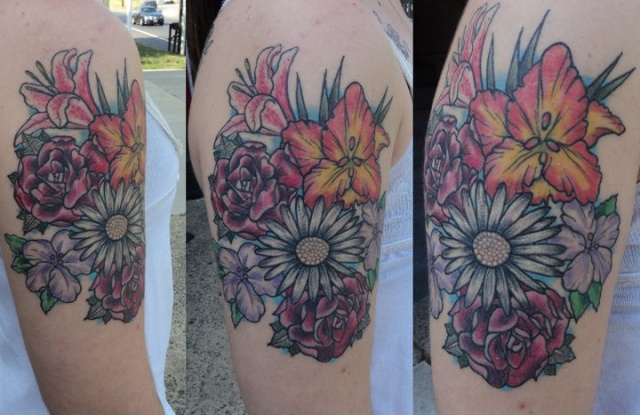 Both have agreed to chat with me about themes, concepts and ideas that I have mentioned in my previous blog about the direction my story was going. I am awaiting an answer on speculative times and dates.

I have also requested two of my recent online (Twitter) contacts to interview with me. Christine Murphy

(@ChrisMeanStreet), an apprentice artist at Mean Street Tattoo,College Point, NY, has agreed to interview with me. Due to the busy and irregular schedule of their work, we are trying to set up a time for a slower night of the week. Chris is more than willing to help me out and we have been in email communication to establish a firm time. I am waiting to hear from Brandee Gordon

(@nativeinktattoo), of Native Ink Tattoo, Central Indiana. I mentioned Ms. Gordon and her studio in my previous blog.

And, perhaps reminiscent of Hunter S. Thompson, as the research begins to develop and I get deeper into this world of ink, I find myself with appointments and invites from the artists I have been in contact with. I have tentative appointments with Erin and Christine. I fancy the thought of one day flying out to Indiana to get work done by Brandee, and Brian is right across the bridge, inking away. In fact, the more I grow to learn about and appreciate the deeper implications of the craft, the art, and the people who do it, the more I find myself intrigued by the idea of traveling to new artists for different pieces.

It seems that this adds another dimension to the piece, in which it is no longer JUST a piece of who you are, it is a tale of where you’ve been and who you’ve met and in this instant (and for every instant after) that inkwork on your skin tells a tale of a person and place with whom you will forever be connected. It is, in this sense, a “talkative thing” (as described by Lorraine Daston in her introduction to “Things That Talk” (Zone Books, 2008)).