After falling short with my first prospective annotation object, it was time to withdraw and regroup. I’d originally considered the tattoo machine as the perfect image to represent the research that I was immersed in. What better object to anchor the many facets of my project than the tool that bridges the artist and the customer, making the creative process possible. It would be like annotating the sword of the duelist, the gun of the gunslinger, the skateboard of Tony Hawk…you get the idea. But I thought that was too simple, too limited. But it’s not limited, and it’s only simple in its straightforward delivery of the topic. Bill Wolff suggested the machine as did several of my peers.

As fate would have it, as has been the course of my research this semester, I fell into an awesome picture. Brandee Gordon, Native Ink Tattoo, posted a picture of her holding her favorite tattoo machine. 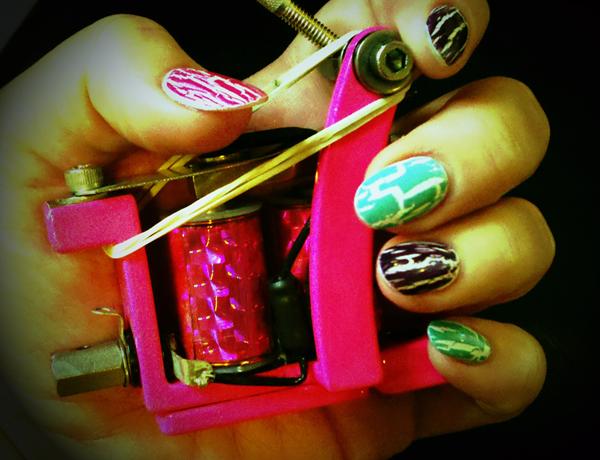 It’s a bright pink tattoo machine. I emailed it to Bill and he suggested I get the machine alone, but loved the pink as it opened up discussion for gender issues and representation in the tattoo industry. I asked Brandee to take a separate picture of it, which she was more than happy to do. She has been incredibly receptive and helpful, providing me with a lot of additional information and media upon request.

Now, it just so happens that Brandee just had some new ink done on her own body and posted a Twitpic. I saw it and knew in an instant that it spoke volumes about what I was working on. Her new tattoo demonstrated the connection between art and tattooing. Again, Brandee was more than happy to let me use the picture for my potential Harper’s annotation. Here are the images I intend to use:

So, I’ll look to tackle the following themes in the call out boxes of my annotation:

I think that the two images compliment each other very nicely and provide a concrete base for definitive facts and solid research. Again, I am grateful to Brandee, who is on the road again…in NYC, guest tattooing and visiting there for a few days. Always on the move..lol.

I’d like to present this short film clip of Brandee at work, creating a memory on a customer’s arm and acting as the vehicle of love and a family’s embrace of generational divide. This video had a tremendous impact on the direction that my final genre piece will take. Enjoy.